MALCOLM BIRD's illustrations have appeared in numerous magazines and newspapers and he has designed various greeting cards, comic strips, and books. Regular commissions have included three comic strips - "MADGE AND BERYL" for JACKIE, "LUCY'S LOT" for PRIMA, and "THE WRIGHTS" for WOMAN'S WEEKLY magazines, and he illustrated Lynda Lee-Potter's column in the DAILY MAIL for 25 years.

He wrote and illustrated THE WITCH'S HANDBOOK , and THE SCHOOL IN MURKY WOOD. He also illustrated the series of books written by Alan Dart - THE CHRISTMAS HANDBOOK, THE PARTY HANDBOOK and THE MAGIC HANDBOOK.

Co-creator, with Alan Dart, of THE PIGGLES™, a trio of pigs living in Pigglemere, a village (not unlike Grasmere) in Cumbria in the English Lake District. They are Squiggle, his twin sister Wriggle and their baby brother Giggle. Their first appearance was in Woman's Weekly as toys, for which Alan supplied the instructions. Patterns for clothes and accessories have been in the magazine since. The Piggles are now trademarked, and there are plans for a series of ebooks.﻿ The first one, THE PIGGLES' WINTER TREAT, is available on the iBookstore. Alan now has knitting patterns of the three Piggles, and Giggle's toy pig, Likkle Piggle, at his website.

A new Spanish edition of The Witch's Handbook  was published in 2018 by Ediciones Maeva.

As it was first published in the United Kingdom in 1984, those witches have certainly lived through the many different language editions of the book over the years, and it's the book that generates the most fan mail.

This compilation from JACKIE magazine (and previously published as THE BEST OF JACKIE ANNUAL (2006) and MORE OF THE BEST OF JACKIE ANNUAL (2007)) includes a full page MADGE AND BERYL comic strip, and various quiz illustrations (though none are credited).
Also two early Alan Dart knitting patterns - one to make toys of Madge and Beryl, and one to knit a fry-up (beret and bag with your choice of chips, peas, sausage, bacon and egg)﻿ 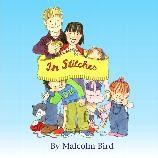 The In Stitches comic strip about the Knitall family was in Simply Knitting every month.
There is now a collection of past strips, in PDF form, available from
lulu.com
to be read on a computer, or on the PDF shelf of iBooks,
or as a 32 page ebook  available for download on your iPhone, iPad, or iPod touch with iBooks.﻿ There's also a preview of the PDF version to see on the Lulu site.﻿

A Nook version is also available from Barnes and Noble.

The Sticky Child is a 32 page wordless picture book in which a cheerful child finds his match in a middle-aged baby-sitter, and they become the best of friends. It was first published as a hardback in the United States and this is the first ebook version. It is available for download on the iBookstore, as is a sample excerpt, for your iPhone, iPad, or iPod touch with iBooks.

Unfortunately, after 12 years, this is the latest, and last, IN STITCHES strip in the current issue 177 of SIMPLY KNITTING. The magazine is being redesigned with a lower budget, and less pages, starting with issue 178, so the strip is no longer required. It's a sad goodbye to the Knitall family - father Jacob, mother Yana and the three children Daniel Kyle, Angora and Baby Pearl, and their cat Sox, and good luck to the magazine. Hopefully, for the sake of the editorial staff, and the readers, it will continue. Alan Dart's knitting patterns for two of the characters (see below) will still be available from his website. 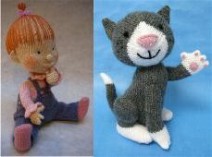 Baby Pearl, the youngest member of the Knitall family, appeared in the June 2006 issue of Simply Knitting as a knitted toy designed by Alan Dart.  He also designed a pattern for Sox for the March 2010 issue. These downloadable patterns are now for sale, as well as many others, on his website. Here's a film showing how to purchase his patterns.
Sox is here and Baby Pearl is here.﻿

A new venture. A collection of cards, some of which feature Malcolm's vast back catalogue of work, and also new ranges which are constantly being added to. Current subjects include the Todney Ladies Club's attempts to exercise, make jam and sew; depictions of Cumbria's favourite animal, the red squirrel; illustrations from The Witch's Handbook.

Cards (which can  be printed inside with personalised text if required) can be ordered from the Greeting Card page. They're sent from the United States, delivered quickly worldwide, at a reasonable price and are beautifully printed on quality card,.