MADGE AND BERYL appeared every fortnight in JACKIE magazine for 7 years, starting in 1977.

Beryl is based on Mum Ted, a bear bought for Alan Dart by his mother when he went in to hospital as a child. (Photo below.)

When we used to drive regularly between our bedsitter in Putney, London and our cottage in Todmorden, West Yorkshire. BBC serialised  Beryl Bainbridge's book, A Quiet Life, on the radio so Madge and Beryl were inspired by that.

There are 230 strips available for publication. 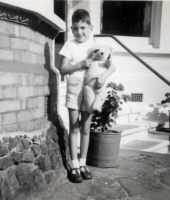 WITCH AND SPIDO first appeared on a greeting card for Gallery Five.

THE WRIGHTS appeared every week in WOMAN'S WEEKLY magazine for 4 years, starting in 1984. There are 200 strips available for publication.

and the latest, IN STITCHES, which began in 2006 and appeared in SIMPLY KNITTING magazine every month for twelve years.